Venture north into the Arctic Circle and the far reaches of Finnish Lapland for a holiday experience like no other at the Kakslauttanen Arctic Resort.

Kakslauttanen is a truly unique resort. An arctic village comprised of 31 log cabins and an assortment of ice-made buildings (constructed from new each winter) and their world famous glass and ice igloos! This represents one of the most remarkable ways to get close to the majestic nature of the north while revelling in the cosy luxury afforded by this exclusive retreat.

Depart the UK on a flight to Ivalo. On arrival, you'll take the airport shuttle to Kakslauttanen, deep in the frozen wilderness. Your accommodation for the first three nights is a Kelo Cottage in Kakslauttanen's East Village. These traditional log cabins perfectly fit with their Arctic surroundings, all delightful rusticity with fireplaces and saunas instead of TV and wifi. Take time to settle in before making your way to the restaurant for the first of your included meals - three courses based on the traditional flavours and ingredients of Finnish Lapland.

With half-board included, you'll begin your days here with a delicious breakfast, the perfect fuel for the winter adventures that lie in store. The first of these is a reindeer safari, perhaps the most authentic way to experience the region's wilderness and culture. Decked out in thermals - included in the price - you'll have time for a quick photoshoot with your newfound friends before settling into a sled complete with cosy blankets and heading off into the forest. The pace is slow and the scenery stunning, as you make your way to a herder's shelter for hot coffee by a roaring fire. You'll also have time to explore the Sami Village and try your hand at lassoing. Then, head back to base for a leisurely afternoon and another delicious dinner as you look forward to the next day's activity - a thrilling safari by snowmobile. Heading out after dark, following a full day of optional excursions - there's everything from Nordic Skiing to horseback rides - you'll rev your engines to go in search of the aurora borealis, riding two to a vehicle and swapping half way.

The adventures continue today as you kick things off with an included husky safari - perhaps the quintessential Arctic experience. Riding two to a sled, and taking it in turns to drive, you'll mush your team along frozen trails beneath the forest canopy. Back at the farm at the end of your tour, it's time for hot drinks and husky stories from your expert guides. Then, this afternoon, you'll swap your log-cabin accommodation for one of Kakslauttanen's famous glass igloos. With cosy beds, a toilet and sink, and thermal glass - the igloos are heated to around 21oC - they're a wonderful base for private views of the inky skies above, hopefully painted in the vivid colours of the Northern Lights. The next morning, make the most of the showers and sauna, located just a short dash away, before jumping on the airport shuttle back to Ivalo and your flight home. 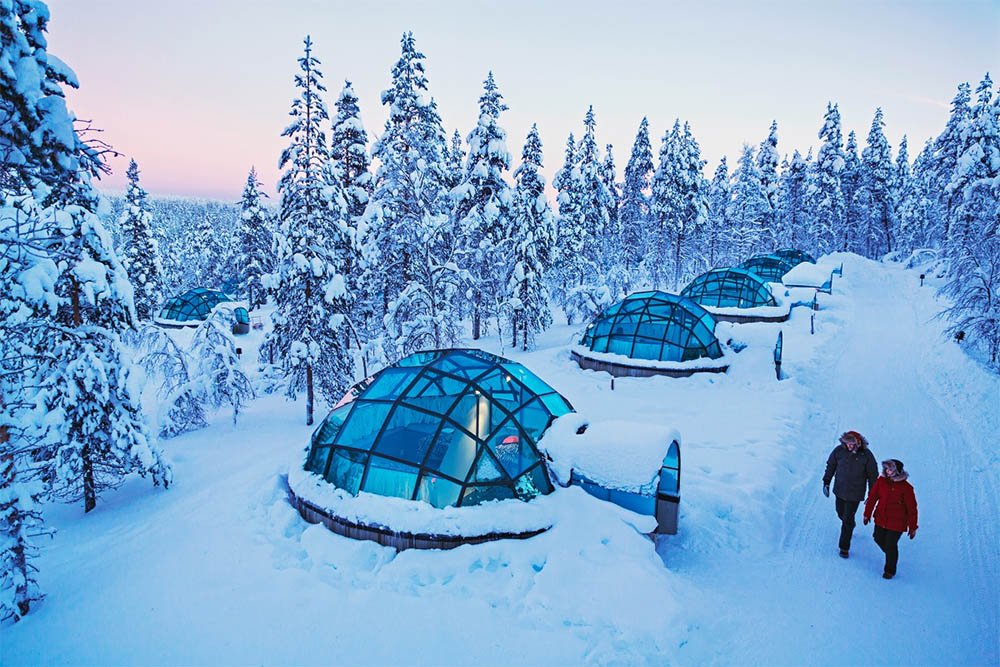 The cabins at East Kakslauttanen are the handiwork of Jussi Eiramo who went there as a young man for a summer’s fishing and has stayed ever since. The cabin village, originally known as just Kakslauttanen, is probably Finnish Lapland’s most exquisite example of deadwood log cabins there is, and the giant one at its centre unique in every respect. The 31 cabins and restaurant are all testimony to Jussi's passionate attention to detail and come in varying sizes. All are equipped with shower, toilet, kitchenette, open fireplace and sauna, and set amongst trees around the central building. This has a fully licensed restaurant with an open fireplace around which local specialities are cooked, and a small handicraft/souvenir shop. Kick sleds are available free, gratis and for nothing & cross-country skis & snowshoes can be hired on the spot. It's very much a matter of personal opinion which village you might prefer but the East is perhaps more authentically Lappish in style.

As with the Jussi Eiramo's* East village, which is some 3 km away, the deadwood log cabins here look just as you would want a log cabin in Lapland to look like with a similar profile and amenities but generally larger: 52sqm ones for up to 5 people and 82sqm with two separate bedrooms for up to 6. Each is equipped with shower, toilet, kitchenette, open fireplace and sauna. The village also has two restaurants, one serving traditional Sami food and the other a touch of Asian fusion (don't ask!). *Owner and architect Jussi went to Kakslauttanen as a young man for a summer’s fishing and has stayed ever since;building first his original cabins, then an ice gallery and snow igloos, glass igloos, a smoke sauna and latterly the West Igloo village. 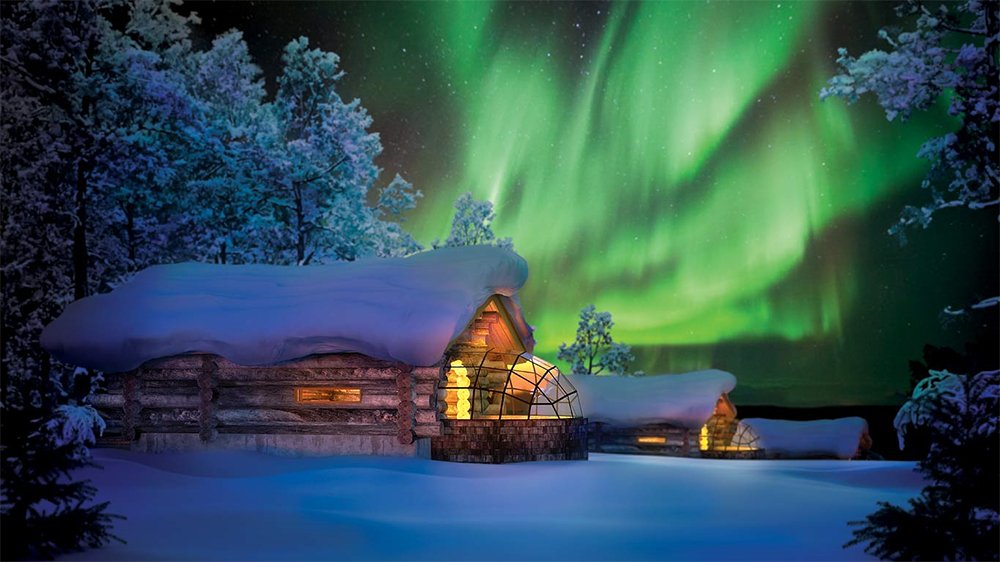 The cabin bit looks like you want a log cabin to look like: built from the rare ‘dead standing’ pine known as kelo which, needing no machining, retains all its natural texture, colour and even pine smell. The igloo bit is made of a unique heated glass which keeps its clarity and through which you can see the stars and Northern Lights for as long as they appear and you can stay awake. The Cabigloos located in the West Village are 57 m2 with a twin sofa bed and bunk beds in the living area and twin beds in the Igloo bedroom part. Each has an open log fire, WC/Shower & private sauna. 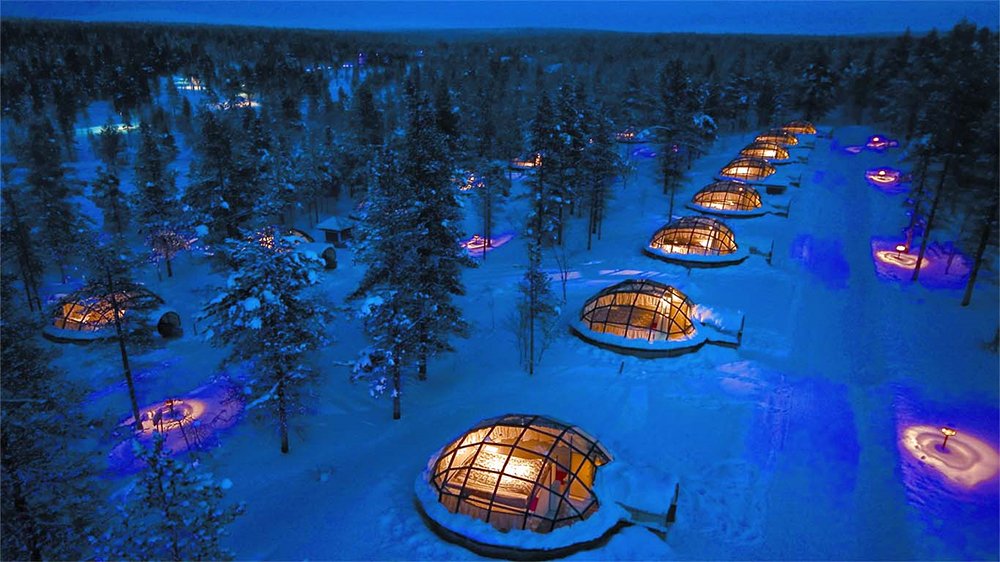 The original glass igloos in the Kakslauttanen East Village, along now with newer larger ones in the West Village, are yet more testimony to Jussi Eiramo's obsession with detail. All are built with a thermal glass domed ceiling that insulates the interior to keep it warm and whose frost preventative element maintains crystal clear panoramic views even with outside temperatures as low as minus 30 Celsius. The smaller ones which are tiny, tiny have twin beds, hanging locker and a WC/hand basin, whilst the new larger ones at 32sqm have 4 single beds, shower and WC. Of course, if you are opposed to all this genuflection to modernity and want to go for the real thing, there are also snow igloos which maintain an inside temperature of between minus 3 and 6 degrees Celsius, and in which you bury yourself in a thermal sleeping bag for the night. Within a short walk of all igloos there are gender separated showers and saunas, perfect for washing and warming up in the morning before breakfast.

Please fill out the form below and we will get back to you as soon as possible.